NEW YORK, May 15, 2015 /PRNewswire/ – Architectural Record today announced its annual Advertising Excellence Awards, which recognize the most effective ads in the building and design marketplace, and the companies and agencies that produce them. The awards were presented at a breakfast and panel discussion during the AIA 2015 National Convention & Design Exposition in Atlanta.

Describing the awards program, Laura Viscusi, Vice President & Publisher, Architectural Record Media, said, “Getting an architect’s attention is a special challenge for advertisers. Marrying the product’s message so it is understood with a compelling image that captures the attention of the architect is no easy task. Our program recognizes those advertisers who have successfully met that challenge with advertising that has both visual appeal and effective messaging. Congratulations to all of our winners who were selected by a distinguished panel comprised of the very people for whom these advertisements are created.”

CAST CONNEX picked up an award for its advertisement related to custom castings. Kevin Gordon raved about the ad, calling it one of his favorites and remarking at how the component shown is both sculpture and structure. The panel also commented on how the ad catches the eye, inspires thought, and very subtlety points those interested to excellent resources for additional information including a continuing education article on steel castings. CAST CONNEX’s other AR advert – one for its Universal Pin Connectors – also received a nod from Viscusi, being called “equally elegant”. 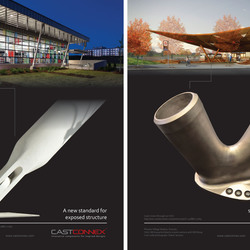